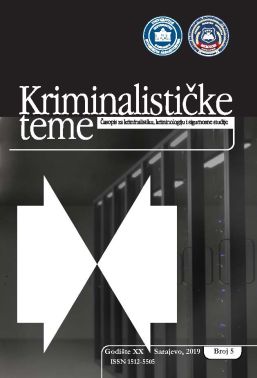 Reason for writing and research problem (s): The technical technological development of human civilization has led to the invention of the Internet and social networks. However, these inventions were unfortunately abused and became a means and method for the execution of various felonies in the field of cyber crime. Software is the center of this form of crime and the main mean of carrying out the crime. The normative framework in the fight against cyber crime consists of international documents and harmonized national legislation. The organizational framework consists of state institutions whose jurisdiction is the prevention and combating of this form of crime and specialized services of the police, the prosecution, the court, the ministry of finance, and others. Due to the specific manner of execution, the characteristics of the perpetrator, the absence of the crime scene and the time and place of the occurrence of the consequences of the cyber crime, the work on detection and proofing requires specific knowledge, skills and training. The primary role in proving this form of crime has specific cyber forensics in order to obtain relevant evidence in order to clarify and arrest the perpetrator. The paper also analyzes certain felonies committed in the field of cyber crime in the Republic of Serbia and provides significant results in the detection and proving of these felonies. The authors in the concluding remarks, in order to improve the legal and institutional framework for the suppression of cyber crime, have submitted de lege ferenda proposals.

Aims of the paper (scientific and/ or social): To point out potential new emerging forms of cybercrime and their modus operandi and to present the proposal de lege ferenda for the improvement of the normative framework, practice and state cooperation.

Methodology/ Design: The work is based on normative and comparative-legal methods.

Results/ Findings: General conclusion: Multidisciplinary and multi-agency approach and international operational cooperation of the police, especially in the Western Balkans, which is of great importance for the detection and fight against cyber crime.

Research/ Paper validity: The justification of research is affected by an enormous so-cial danger from the most serious forms of cyber crime, due to the specific way of execution, the characteristics of the perpetrator, the absence of the crime scene, and the time and place of the occurrence of the consequences.