Murders of Family Members in the Republic of CroatiA: Features of Offenders and Victims in Regard to the Means of Realization 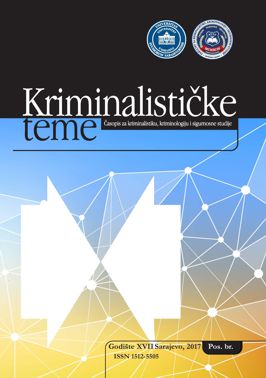 Kondor-Langer, M. ., & Prpić, R. . (2017). Murders of Family Members in the Republic of CroatiA: Features of Offenders and Victims in Regard to the Means of Realization. Kriminalističke Teme, (5), 169-185. Retrieved from https://krimteme.fkn.unsa.ba/index.php/kt/article/view/153
ACM ACS APA ABNT Chicago Harvard IEEE MLA Turabian Vancouver

Methodology/Design: Secondary data sources were used for the research sample, namely collected police files of murders and aggravated murders of family members committed on the territory of the Republic of Croatia in the period from 1 January 2005 until 31 December 2010. During the research, a total of 113 murders and aggravated murders were analysed. The research sample included 113 offenders and 128 victims since some of the offenders had committed a criminal offence to the detriment of several victims. After the data collection had been completed, the data from the survey questionnaires were entered into the database in the SPSS Statistical Software (version 16.0), and after the data had been entered, a logical control was performed of the input.

Research/Paper limitation: Limitations of this research are related to the lack of specific data in certain analyzed files therefore was formed the category “no data”.

Results/General Conclusion: Considering the goal of the research, differences were found in certain observed features of murderers of family members and their victims in regard to the means of realization.

Research/Paper Validity: It is important to stress that the preformed research has shown that, in the cases of family murders murdered with a firearm, the offenders were not in legal possession of such firearms. Therefore, this research points to the need to take additional efforts to take certain measures and actions related to the suppression of the availability, supply and possession of illegal firearms.