Self-Reported Juvenile Delinquency and Family Relations in Bosnia and Herzegovina 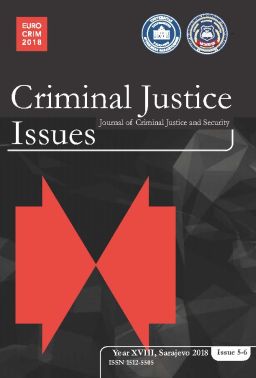 Physical punishment by parents, as indicated by a study conducted in 2015/16, is the most common form of victimisation reported by students in Bosnia and Herzegovina (29.2% N=758 RS, 31.4% N=1.326 FBiH).  This paper will analyse the relationship between the variable “Did your mother or father (stepmother or stepfather) ever hit, slap or push you? (Including the times when this was punishment for something you did.)?” and variables used to measure delinquent forms of behaviour as well as those used for analysis of students’ family relations.

Preliminary cross-analyses of collected data on the victimisation of students and families and manifested socially unacceptable behaviours of children indicate that this group of factors is of exceptional significance. Previously presented study results have demonstrated that in families with pronounced problems between parents (conflict, violence, divorce) or parents’ abuse of alcohol and drugs they represent risk factors for socially unacceptable behaviour in children. Students who committed offences (graffiti, vandalism, shoplifting, illegal content download from the Internet, alcohol consumption) were twice as likely to indicate that their families have the problems described above.

We believe that the results of these analyses can contribute to better understanding of the factors influencing delinquent behaviours in minors and thereby to the improvement of the system for prevention of undesirable behaviours. Considering that our legislation contains provisions concerning adequate supervision of children, we believe that the situation in this area can be improved through consideration of the results of studies dealing with this important social issue.
PDF (English)