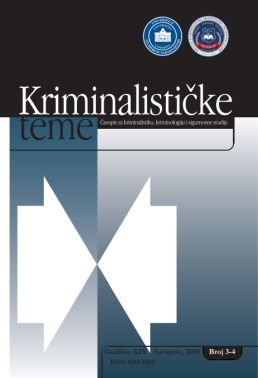 Reason(s) for writing and research problem(s): The topicality of modern migrations, the problem of the migrant crisis and the attempt to respond globally to migration management.

Aims of the paper (scientific and / or social): Since its founding in 1951, the International Organization for Migration has adapted significantly, moving mainly from a regional organization of logistical responsibility to a global one with a much broader range of objectives, especially in humanitarian engagements. The aim of the paper is to point out the new role of the International Organization for Migration, which became a UN agency in 2016, and its importance in managing migration, setting standards and realizing the human rights of migrants and improving their welfare.

Methodology / Design: In the context of the paper, the dogmatic normative method and the axiological method were used as specific methods in law. A meta-analysis of data from the International Organization for Migration was performed.

Research / work limitations: Precise data for BiH are not available, which is a serious limitation for a detailed comparative scientific analysis.

Results / Findings: The expansion of the International Organization for Migration made it the UN Migration Agency in 2016, as the UN could not respond to the crisis caused by the large number of migrations globally within the UNHCR, which deals exclusively with refugees.

General conclusion: Only a decade ago, states were unprepared to deal with migration in the context of the UN. However, they are now ready to negotiate resolutions, declarations and global agreements, which has contributed to the decision on IOM’s entry into the UN system. The progress that has been made, has been built on regional processes, dialogues and consultative mechanisms that began in the mid-1980s. Migration management in general lacks strong normative bases that would provide an adequate response to modern migration flows. The result of these tendencies is the adoption of the UN Global Compact for safe, orderly and legal migration from 2018.

Justification of research / work: Contemporary trends in international migration law, along with climate change and terrorism, are recognized as one of the most important topics.

You may also start an advanced similarity search for this article.