Formal Manifestations of Organized Crime in Bosnia and Herzegovina 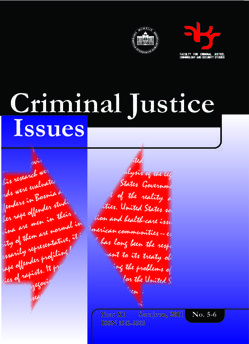 Design/Methodology/Approach: Literature review has been carried out in order to determine the structure and content of organized crime. In the process of writing this article, the author primarily used a method of content analysis that includes an analysis of available sources and reports of official authorities (domestic and international) and other relevant materials.

Findings: Organized crime is a negative and harmful occurrence in all societies, including in Bosnia and Herzegovina (“BiH”). It is characterized by it ease of adaptation to socioeconomic and sociopolitical conditions, and especially its adaptation to the conditions of countries, of which BiH is one. Therefore, the article surveys organized crime in BiH, with particular reference to the characteristics and conditions of organized crime in BiH and its demonstrated forms therein. One characteristic of organized crime is that, influenced by global social changes, it has undergone significant changes. These changes indicate that some forms have been actualized, while others have just appeared. In this context, traditional activities of organized crime are observed, including: drug trafficking, trafficking in human beings, smuggling of various goods and services (arms and ammunition, artwork and other taxable goods), corrupt business enterprises, organized violent crime, etc. Newer forms of organized crime including: gambling on the Internet (online sports betting, casinos, money-laundering schemes, etc.), manipulation of stock markets (rising-falling schemes), mortgage fraud (unfair assessments, dishonest lenders, insurance fraud), credit card fraud, usurous telephone prices (“sky-high” phone bills), cyber-crime, etc. It also is important to emphasize the appearance of new ways of organizing criminal groups in so-called criminal networks as transnational criminal collectives and to point out the specific results of this form of organization and activity by criminal groups. Some of these phenomena are present in BiH, and they demand an adequate institutional and legal reaction. Global social changes that have occurred over the past twenty years have given rise to new phenomena, such as technological development, migration, the transnational transfer of capital and services, open markets, etc.

Practical implications: The purpose of this article is to assess new forms of organized crime in BiH and the institutional and criminal responses to them. The results of this article may be applied in the assessment of the new forms of organized crime that have been caused by global changes and may provide institutional and criminal law proposals (de lega ferenda), which would lead to the successful prevention and combating of these forms of crime.